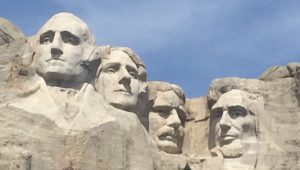 On a recent trip to Mt.Rushmore, I saw the stunning carvings of Presidents Washington, Jefferson, T. Roosevelt and Lincoln.  With three friends, we took a selfie with Mt.Rushmore in the background.  I was second from the left and slanted my face upward.  I was Thomas Jefferson. As we are about to celebrate our most important national holiday, I connect the Fourth of July, Thomas Jefferson and Olive Oil.

Did you know that Thomas Jefferson, our third President and principal author of the Declaration of Independence was also what would be considered today… a foodie?   Whenever I think of a foodie, I think… olive oil. And so did Jefferson, who proclaimed, “… the olive tree is surely the richest gift of heaven.”  Deemed a “necessity of life” along with wine and books, Jefferson made sure that he had his own supply of the precious liquid gold and imported four to five gallons of olive oil a year from France.

Other interesting facts about Jefferson:
– Spoke 5 languages
– Founded the University of Virginia
– Introduced new plants and desperately wanted to plant olives
– Became heartbroken over his inability to produce a harvestable crop of olives and establish an olive culture in South Carolina.

Learn a bit of history and get a great salad dressing recipe for a July 4th party.  Check out my article in the Olive Oil Source:  Thomas Jefferson and Olive Oil …Our First Foodie President