Published on November 8, 2016 | in Secrets & Tips, Travel/Learn, Uncategorized By Carol | 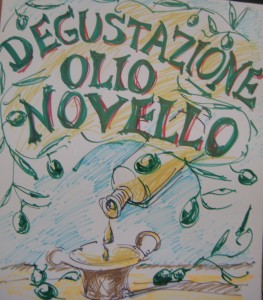 My Olive Harvest Adventure tour features tasting Olio Nuovo (new olive oil).  One way to test and taste olive oil is with “la prova del pane” (the bread test) or the ritual of the fett’unta (oiled slice), a simple ceremony that celebrates the new olive oil harvest each year.

On my Olive Harvest Adventure tours, we taste olive oil  at sagre (festivals), at frantoi (olive mills) or at the Villa. 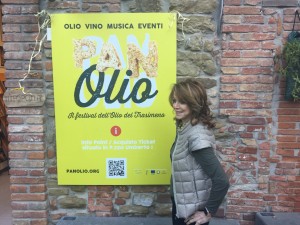 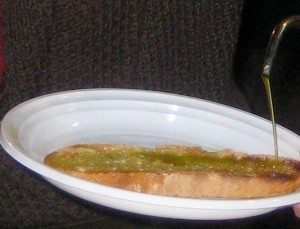 You may think that this “recipe” sounds like a lot like a basic bruschetta and you are right. Fett’unta and bruschetta are two words for the same dish, although the term, bruschetta is more widely adopted. The difference is that fett’unta (well-known in Florence) puts the emphasis on tasting the olive oil itself while the word bruschetta (well-known in other parts of Central Italy) is intended to emphasize the charring or burning of the bread. Bruschetta typically adds another topping to the olive oil and bread.

Back at the Villa, on my latest tour, one of the guests toasted the bread over a fire in the kitchen; another guest   drizzled the bread with olive oil and topped the bruschetta with black kale. 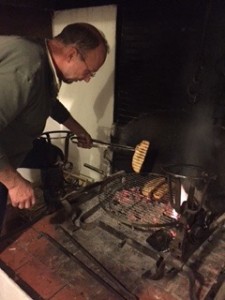 Grilling bread over a fire 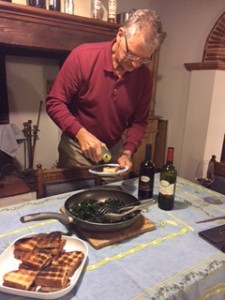 Drizzling olive oil on the bread. 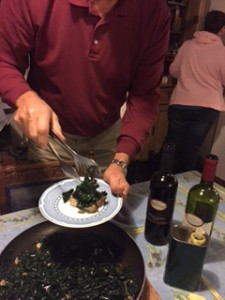